I guess as the techie of the family, it is only befitting that I should get the newly released Apple Watch as my birthday gift. :p Ok no, its also because I have a sweet husband who knows that I love gadgets especially Apple gadgets. Ironically I have been so busy that I haven’t really had the time to keep track or really read about Apple’s latest product. Which also meant that I only read about all of its functions for the first time, 2 days before the watch was delivered/gifted to me.

So now that the watch has been in my possession for slightly more than 12 hours, I will attempt to review this watch from the perspective of someone who has been using it for less than a day.

The Apple Watch was delivered in a solid brown box which looked like I would open it to find an Apple Strudel inside but well it weighed a ton so probably not. I opened it to find a nice white box (typical of the Apple packaging) that was longer than your 15cm ruler (ermm how long was this watch going to be). The watch came in a default M/L length with an additional strap (S/M length) which I later replaced.

To configure your watch, you just had to make sure that you had the Apple Watch app installed on your iphone, switch on wifi and Bluetooth and follow the instructions on your iPhone screen, easy peasy!! Setting up your notification preferences, favourite people to call, apps to appear on your watch etc was done very simply through the Apple Watch app.

Now that we have ascertain how easy it is to set up. Lets talk about what I think are some of my favourites features from a new user perspective.

I love how easy it is to customize the watch face. While I would admit that I have not fully explored this function. I have been able to change the look and feel of my watch just by switching between certain in-built options during my initial exploration.

I also later found out that I could further customize certain ‘parts’ of each chosen face eg. colour of the watch hand or whether I need the day to be indicated. A far cry from my first generation Pebble Watch which was definitely not as interactive and intuitive.  I mean yes, this is an Apple watch after all and therefore as intuitive to use as an iPhone.

I love the Heart rate monitor (don’t ask me why I need it) well I just do! And also love the calorie counter/ pedometer and exercise tracker. I like that there are simple functions that are working in the background and reminding me when to stand up (if I have been sitting for too long) or how many steps I have taken. No need for a separate Up by Jawbone. Potentially I think the exercise tracker might come in very handy when I start using it for cycling trips but we shall have to wait and see if that feature will be easy, accurate and seamless to use. 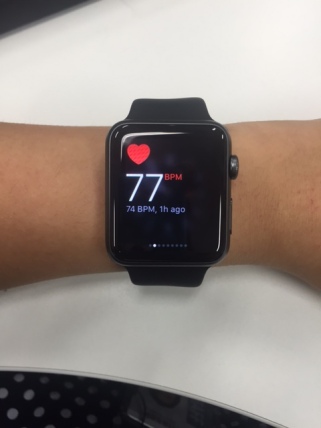 Well yes I guess at the end of the day, this is supposed to be a watch after all. So yes I am super glad that I can tell the time and date with this but whats even more awesome is that I can tell the time of another city (all within the same view). Super useful during travels and when there is a time difference. I will no longer have to repeatedly check my handphone for the time difference because it is all on my wrist! Oh yes and not forgetting the weather too! Below is just one view of the weather page, tap and you will find the % possibility of rain and the temperature. 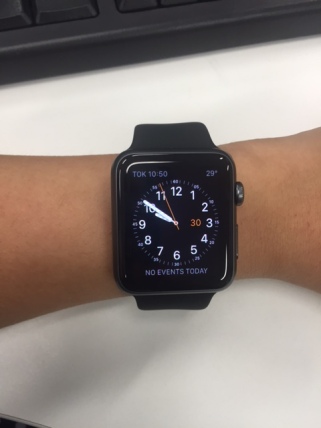 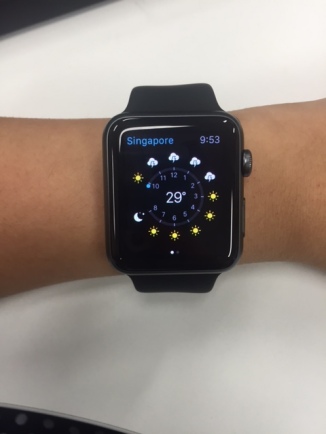 Yes, the calendar is going to be ultra ultra useful! Since my office calendar is synced to my iPhone and now synced to my calendar. I will get ‘buzzed’ 15 minutes before every scheduled appointment or class. I honestly think this is going to prove to be super handy for days when I am overwhelmed with classes and meetings.

The Apple Watch has Siri installed and allows you to read your SMSes and reply to them either by standard default messages or by dictating your message. I have yet to try out if this Siri is any better from the one on my iPhone or if there are less errors in understanding my dictated message. The one thing I have tried though is receiving a call through the Apple Watch. Personally I probably wouldn’t be using it in public because its just weird to have someone on ‘speaker’ and allowing the whole world to listen in on your conversation. However I would say it probably would come in handy when you need to pick up a call as you are driving. The volume and sensitivity seems pretty good so I’m sure it can pick up my voice even if my hands are on the steering wheel. Good if you don’t have an in-built mic and Bluetooth in your car or for days when you didn’t bother to hook it up.

Oh yes and no more missing calls while my handphone is in my handbag because now I would know that someone is calling me even if I don’t pick up the calls from my watch.

While the Apple Watch does not have an in-built camera (I heard that that’s in the works for the next generation?) but it is able to control your handphone camera. Think handphone on selfie stick and not needing a separate Bluetooth clicker device. I guess this has some potential especially for ‘professional’ selfie stick users but this family still needs some figuring out in that area. So some potential there but not sure if it would be that useful for us.

So my verdict or impression of the Apple Watch after using it for less than 24 hours? I would say pretty decent and it has far exceeded my expectations. Honestly I didn’t expect much from the watch, perhaps because I had owned a Pebble Watch earlier and was abit ‘disappointed’. But of course Apple is not Pebble and for a 1st generation Apple Watch, I say it ticks most of the boxes of what I would hope it could do. I’m still contemplating if I would like to ability to tap on it and perhaps the answer will be more apparent to me in a few weeks/ months time but for now I’m happy with my Apple Watch!

Ok going to play with my watch now..:)

Wow! Jah had a whirlwind of a birthday weekend! At least it felt like that to Joel and I. And I don’t even know where and how to begin documenting his 3rd birthday weekend, with all the photos and videos that we took. I’m resigned to the fact that some of these blog posts may just have to contain photos/ videos only. So if anyone has any questions about any of the activities/ places/ gifts etc, please feel free to ask and I will try my best to answer…

To kick things off, we celebrated Jah’s birthday (2 days early) in school. With his ‘carefully selected’, ‘mind changed many times over’ – Marvel Avengers cake. See my earlier post on this to understand what I mean. Getting 20 kids to sit patiently around a table for cake was quite a feat so I’m sorry that I don’t have a close up of the cake. It was a 2kg Marvel Avengers cake from Bengawan Solo and it was pretty yummy. I’m guessing we managed to feed the rest of his school for tea-break that day. 🙂 The kids were also really excited about their goodie bags, especially the boys who were declaring to me who their favourite Cars character are.

All patiently sitting around and waiting for the cake

END_OF_DOCUMENT_TOKEN_TO_BE_REPLACED

We are fast approaching Jah’s 3rd birthday and what would a birthday be without a birthday cake right? Except we all know that getting a birthday cake for a 3 year old is a mean feat! You see, this is not a 1 year old baby who is not going to be able to eat his cake. This is also not a 2 year old who is just starting to talk and recognize his favourite cartoon characters. This is an opinionated 3 year old whose mind changes everytime you say “ok so you are sure that’s the cake you want?” Worse still, we have to get him TWO cakes, one for his school celebration and one for his home party. Up until recently, these are the combinations that he has requested for.