We finally embarked on our long haul journey to the US 2 days ago..well between the option to take a direct flight (15 hours to San Francisco) or a 1 stop option (20 to 24 hours) we were spoilt for choice and many people were kind enough to give us their 2 cents worth on which might work better. Many parents felt that a 15 hour flight at a go without an option to get off the flight and stretch or run it off, was a recipe for disaster. However we decided to give it a try anyway since we preferred the arrival time at 9am.

First half of the flight

Our flight took off at 925am (SFO 625pm), we kept the kids awake although it didn’t take much effort to, since they were really raring to go. Lunch on board was served at about 10+am (SFO 7+pm), I guess u can consider that dinner if u wanted to. The kids spent the next 2 hours, eating and watching their inflight entertainment. By the time meal service ended at about 12+pm (SFO 9+pm), the kids didn’t mind going to bed. Thankfully they are used to a naptime in school at about this time. Lights in the cabin were switch off which made it a lot easier for them to doze off. The kids slept for almost 4 hours! Which meant they woke up at about 4pm (SFO 1am). 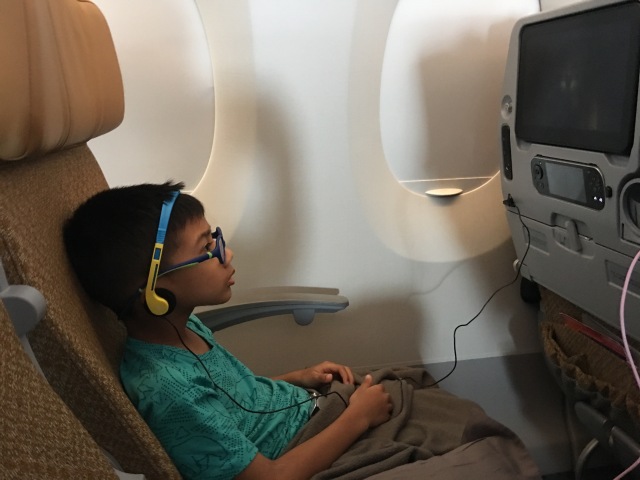 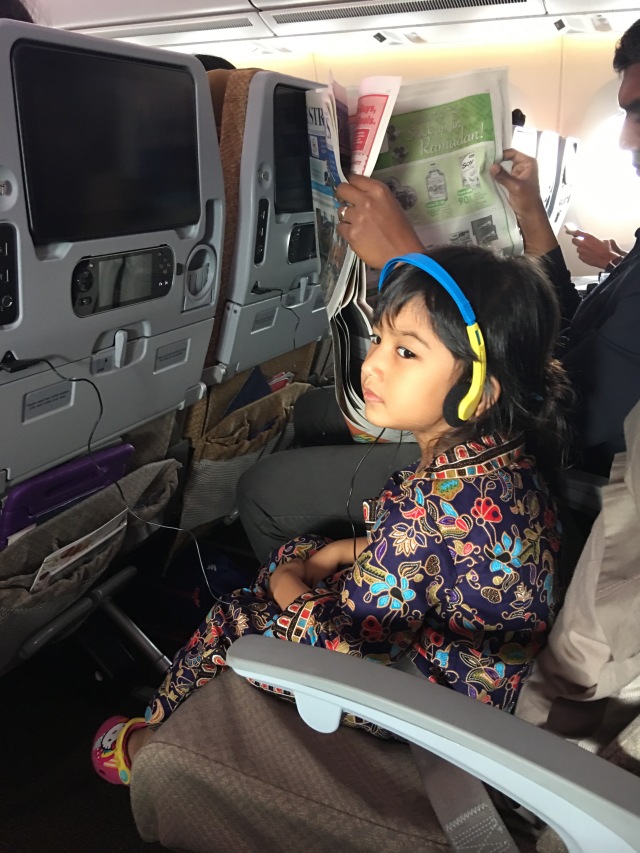 2nd half of the flight

I had tuned my watch to SFO time by now and of course panicked a little (a lot) knowing that they are awake at 1am SFO time! But I really didn’t have much energy to fight them on it (haha what else could I do). Somehow their wake time was actually pretty perfect because the crew started switching on all the lights in the cabin anyway and began serving breakfast. The kids took their breakfast and then continued watching their shows. By the time the meal service ended at about 7pm (SFO 4am). The kids were starting to get groggy again and I told them that they had to sleep for abit. Shockingly they didn’t fight me! So with the cabin lights dimmed again, they took another nap from 7pm to 930pm (SFO 4am to 630am). I could tell when they got up at 930pm (SFO 630am), they were getting a little edgy and impatient but we were only 2 hours away and that 2 hours was manageable with abit of bribery (candies and snacks). The choice of a morning arrival worked in our favour because the kids had all morning to work off whatever sugar they had consumed and they had obviously adjusted to the time difference by the time we landed in San Francisco. 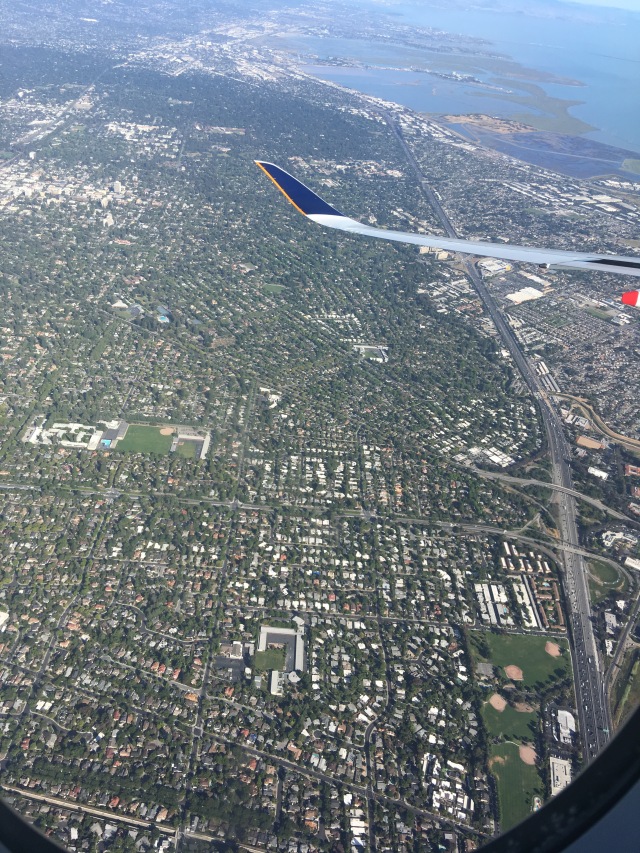 A 15 hour flight is perfectly manageable if the time of the flight is used effectively to tune their body clocks. The arrival in the morning worked in our favour because it was easy to keep the kids up for the rest of the day when they were so excited to get started on their holiday. I’m not sure if the same can be said if we had arrived at night instead. I’m guessing it would be quite hard for them to sleep through the night then. For the record, we made sure the kids were engaged after we landed so there was less chance of fatigue and restlessness setting in and the kids took a nap at about 4pm SFO time. We dragged them up for dinner at 630pm, bedtime was a breeze at 10pm and they slept through the night. Safe to say, they are completely on SFO time now and we will be attempting the 1 stop flight on the way home so more on how to cope with that to come (if we do cope with it successfully of course, wish us luck!!!) 🙂

More on how we occupied them upon our arrival into San Francisco..haha a pretty nail biting experience for the parents :p

Hi everyone! I know we have been very quiet of late (for the last 3 months to be exact). Our family has been plagued with one family emergency after another since February and to be very honest I just haven’t been in the mood or had the energy to write much.

However a little episode with my handphone’s memory being wiped out this past week, reminded me of the reason I write. I lost all my photos from Jan to April 2017 😦 Exactly the period I stopped blogging for. So here I am again, determined to not lose any more of our memories.

We were originally supposed to be on a family trip to Bangkok this last weekend. A city that we used to visit as a couple every year and one that we have not been back to for almost 10 years. We had promised the kids, many fun activities and they were particularly looking forward to Kidzania Bangkok. We also figured it would be a cheaper first time to Kidzania, just in case they didn’t take to it and were afraid to try out the jobs. But as luck would have it, life threw us a few curveballs and the trip was cancelled.

Thank goodness we have a Kidzania right in our own backyard so that we could still keep our promise to the kids albeit a more expensive experience.

We bought our tickets online (few dollars cheaper than at the door) and crossed our fingers and hope that it wasn’t too crowded on a long weekend. We have heard/ read the horror stories of the weekend crowds and were a little worried on how diluted an experience the kids would get.

We got to the check-in counters (resembling an airport) at 10am and were quickly tagged to our kids with matching ‘watches’. This meant that our kids could not leave the place without either one of us and I later found out that I could access all our professional photos just by tapping my watch at the photo shop. Our whole family was synced up! 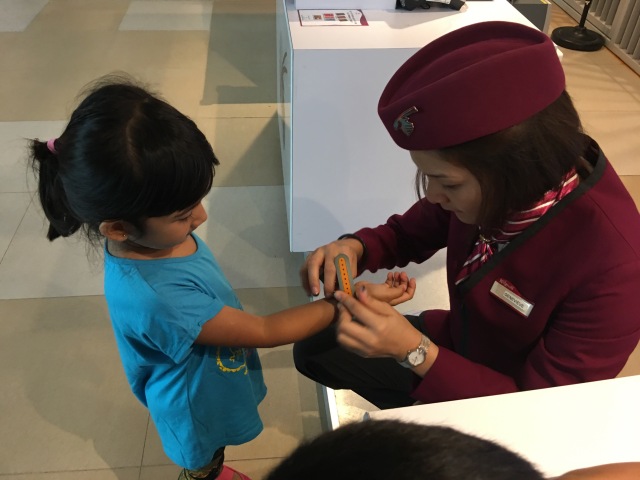 First stop for the kids was the bank, to activate their debit card and bank account where they would store their salary or pay for activities. As we started to walk into the bank with the kids, a staff stepped forward and say “Parents, please wait outside”. Haha what a shock to the system..:p

Jah and Bella came out of the queue a couple of times to ask for us to join them but eventually were convinced that they could just queue together and it would be fine. Jah completed his banking fuss free because he knew his birthday. Bella on the other hand was sent out to ask me for her birthdate before she could complete her transaction.

We headed to the Qatar Airways Pilot and Cabin Crew jobs first and took a queue ticket for 11am. We wanted to try the Paddle Pop Job which was right next to it but the lady told us to come back after the airline job because we wouldn’t finish in time for our 11am slot. I love how the other jobs were very aware that the kids were all probably holding an airline queue card and made an effort to help us plan rather than blindly taking us in for the job. 🙂

To kill time, we ended up at the Spritzer water filtration job, honestly not the most natural job that I would have chosen but the kids were willing to give it a shot and we were all in for a surprise. The facilitator in charge was a dream! She managed to engage the kids and made things so fun for them even though I’m sure the subject wasn’t the most interesting or exciting. They will laughing, giggling, high fiving her and running around (not sure that’s allowed in a real lab though :p). They loved it so much that it helped them relax and got them very keen to try on the rest of the jobs…phew!! A big thank you to her!!! 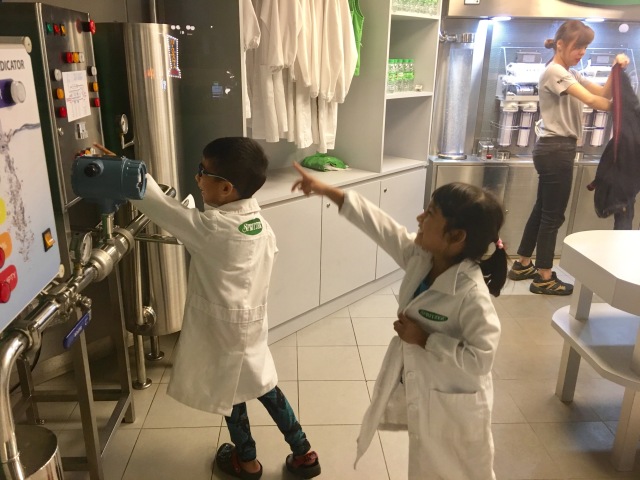 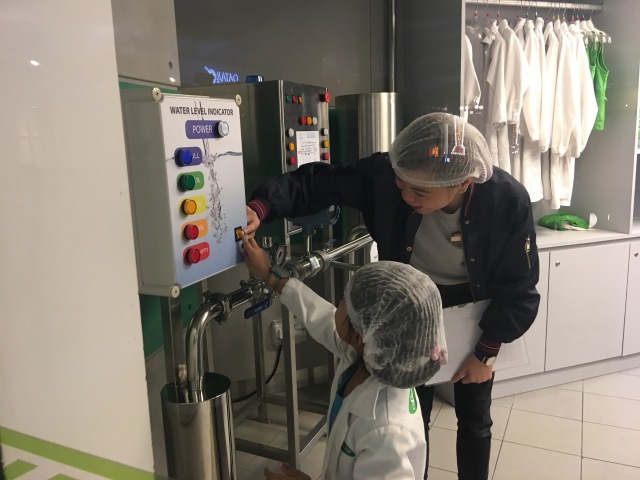 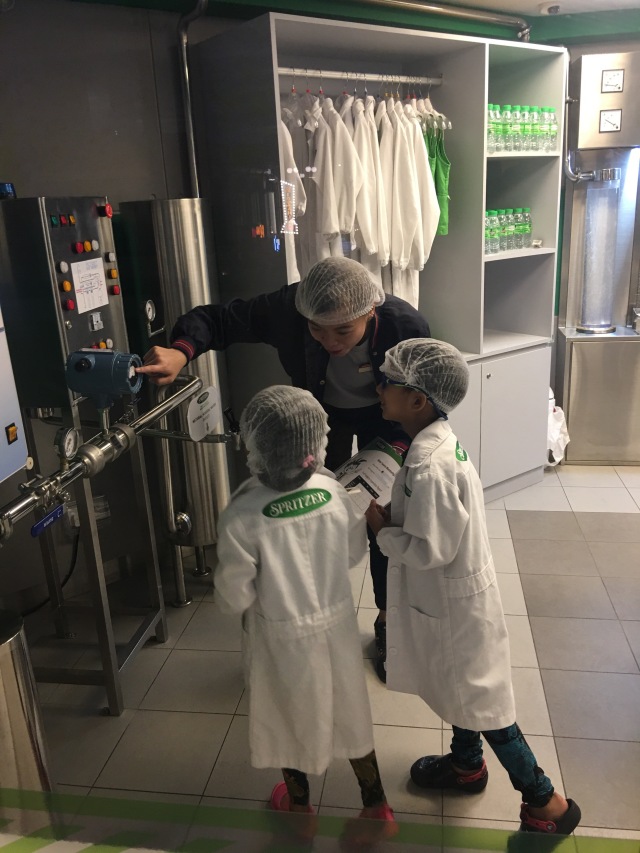 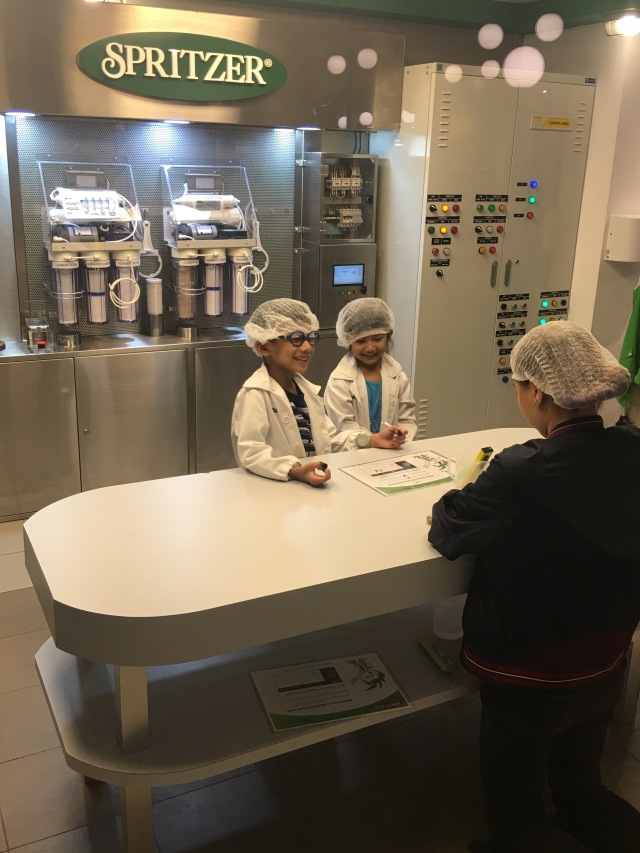 We headed back to the airline job and Jah and Bella were quickly ushered off to their training while Joel and I made ourselves scarce, in case they came running out to look for us. The pilot and the cabin crew had to be separated so we were worried that Bella would freak out because she would only do a job if her Brother did it with her. We were not allowed to see how the pilots did their job but one parent would be invited on board so that the cabin crew could serve them. Jah later told me that his pilot job was very fun and he wanted to come back for it again 🙂 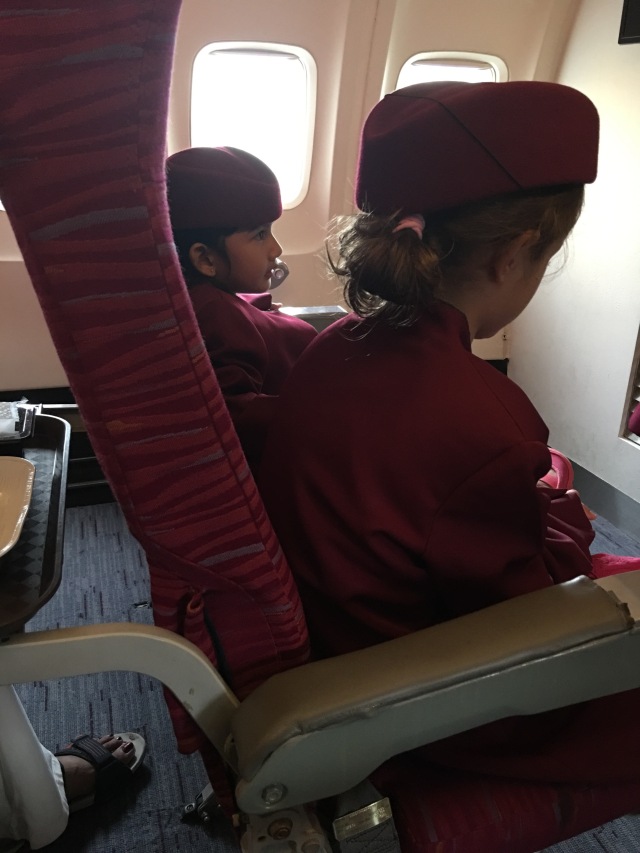 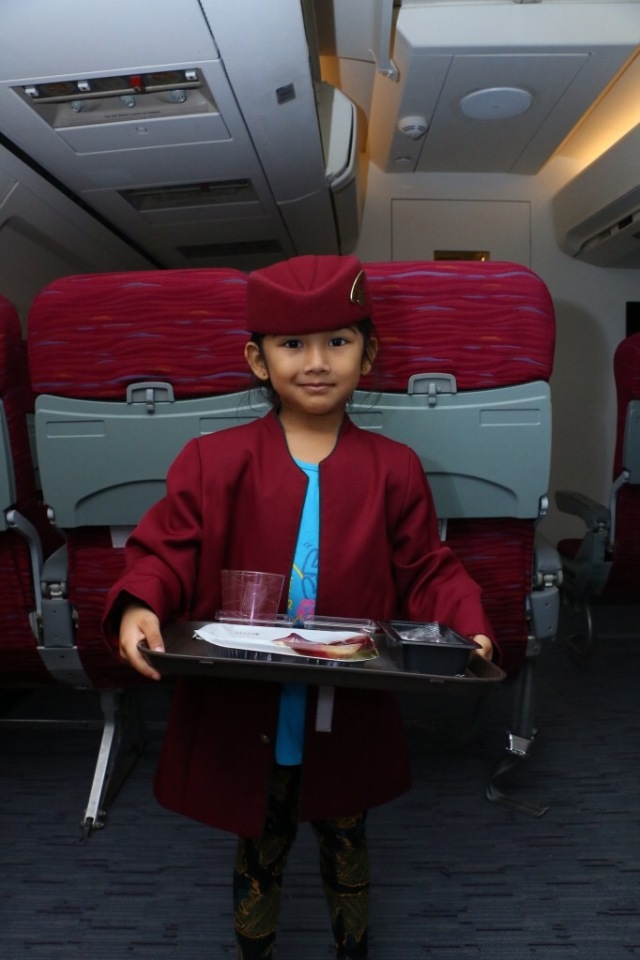 We spent a good 5 hours at Kidzania that day. I was surprised the kids lasted so long but then again you really do need to spend that amount of time, given that most jobs last 20-30 mins minus the queueing time and we were there on a relatively quiet day.
The kids also attempted the following jobs 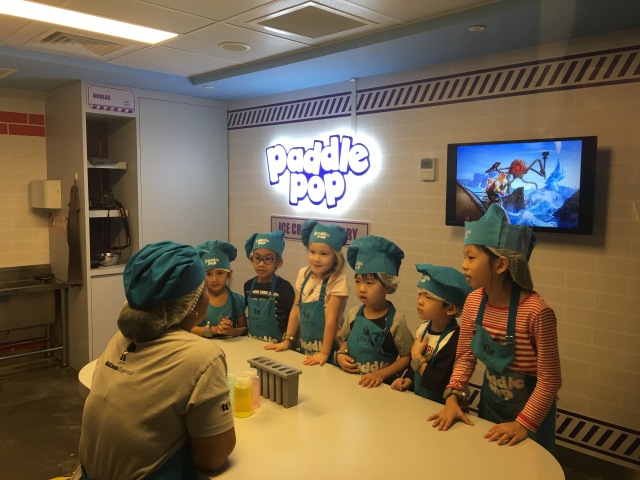 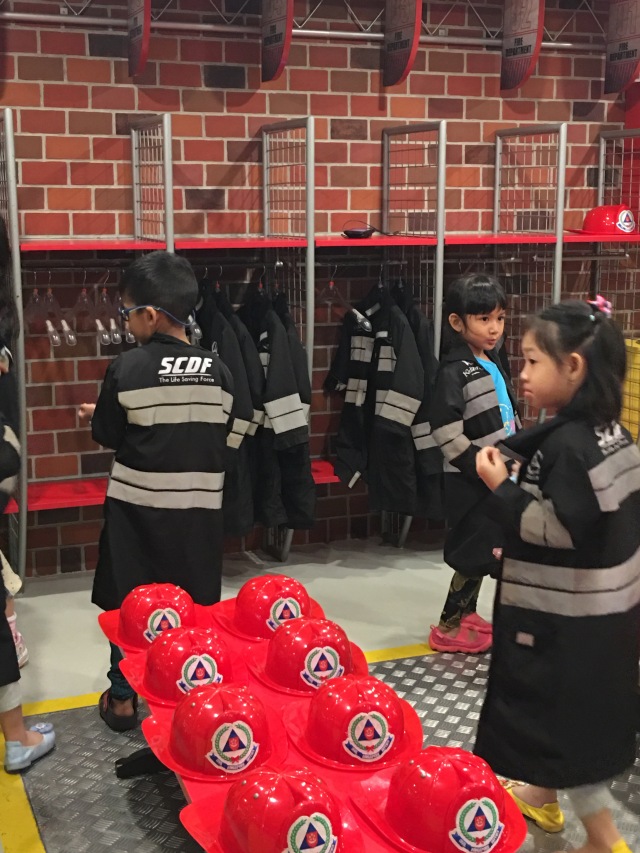 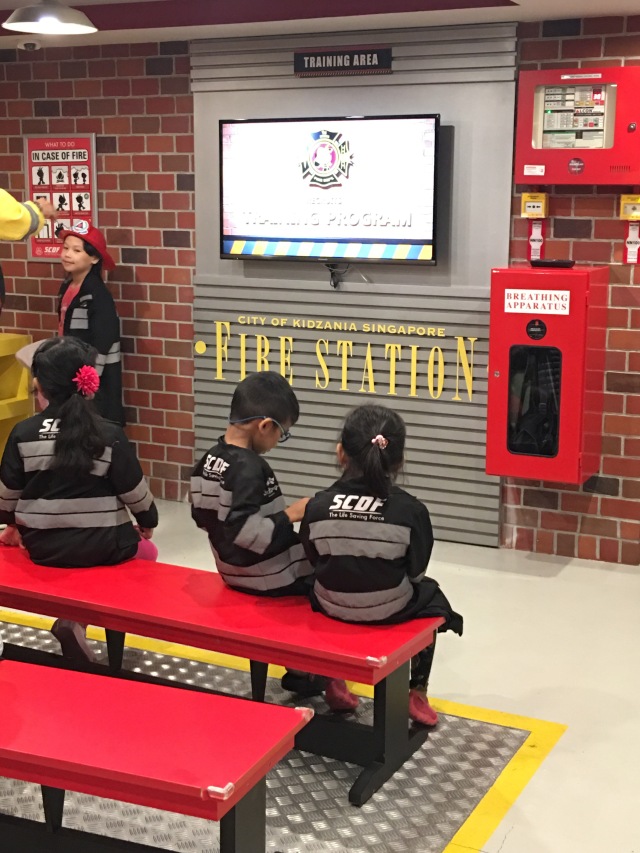 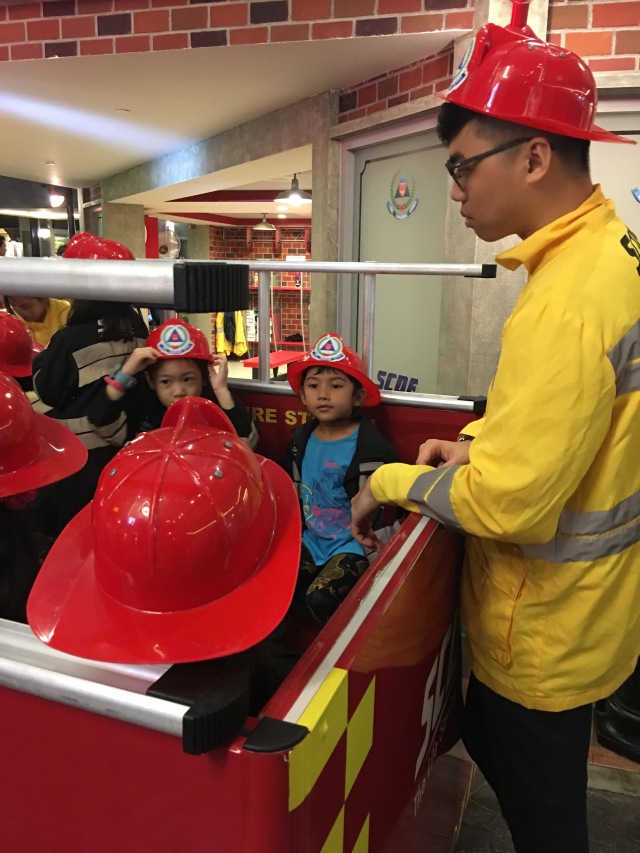 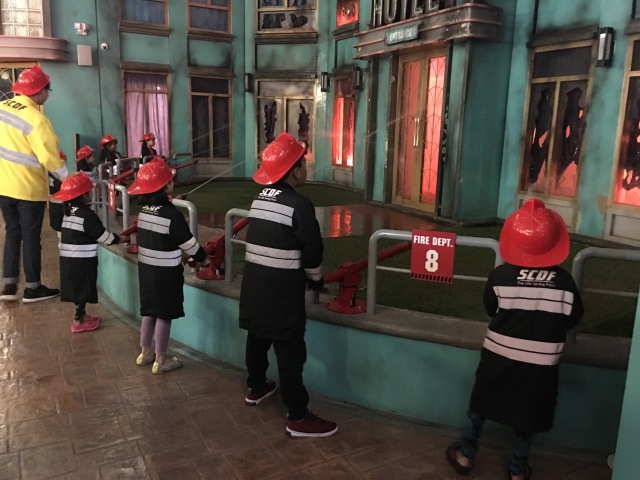 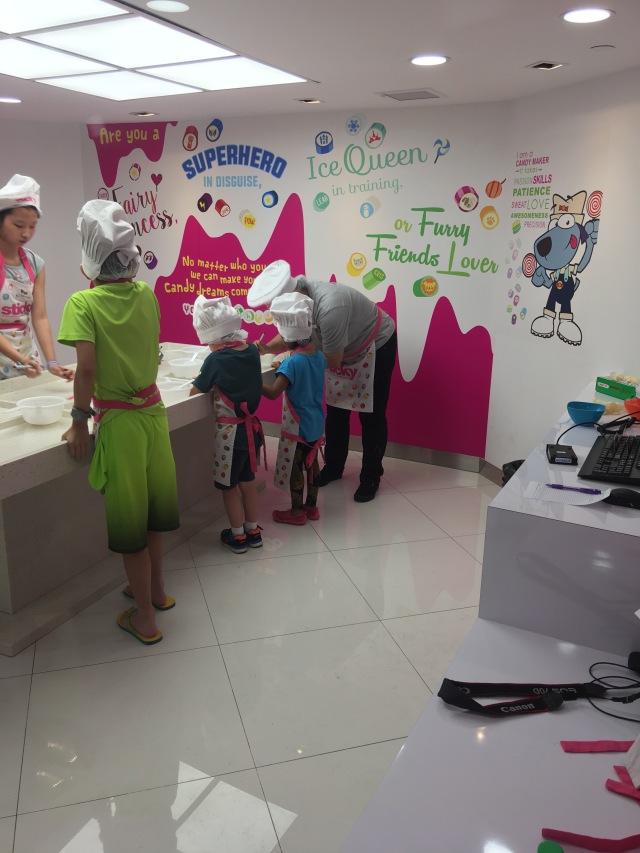 Abbott Milk Lab (Bella was really tired by this time and the only reason she decided to join the 30 mins activity was for the money. Yes I kid you not! She was just waiting to be paid so that her Brother would not have more money than her, in his account) 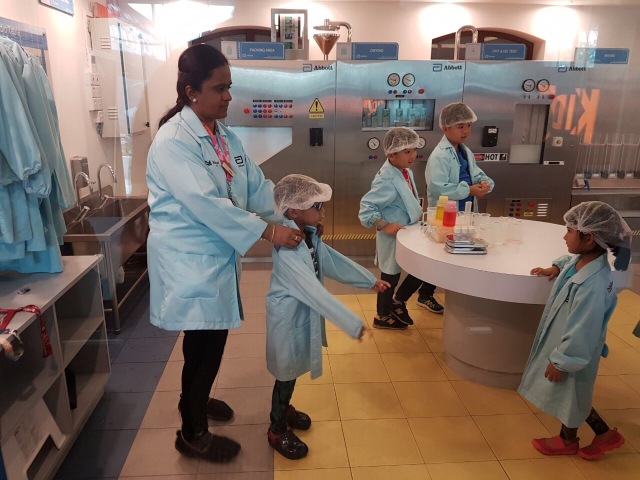 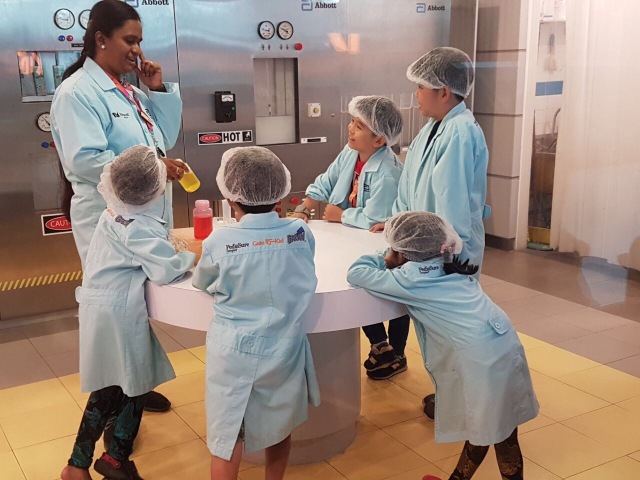 KFC (They initially wanted to do the CSI job but changed their minds because they needed a mid day snack and yes they earned their mid day burger :p) 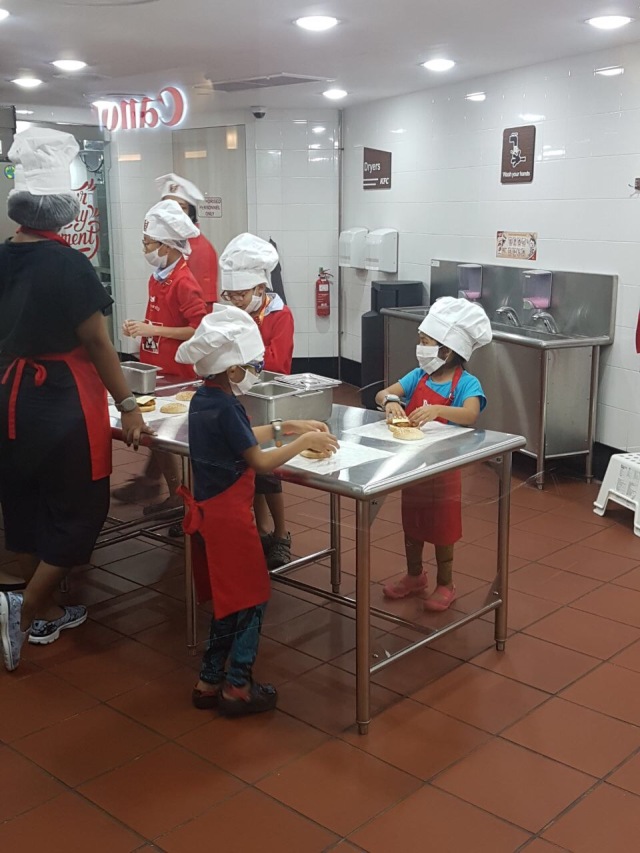 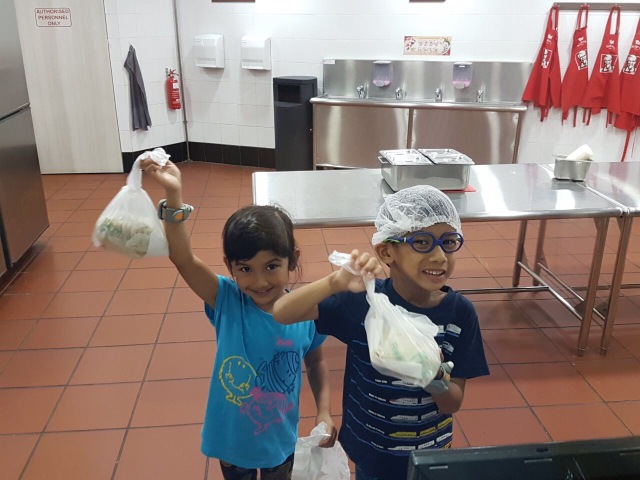 And this was probably 1/3 of the career options they had. The kids had so much fun that Jah is already planning for his next visit and has also asked for a trip to Kidzania as his birthday treat.
It helps that there is some semblance of continuity for the kids too because they get to bring home the debit card which they activated and keep their salary in the card and reuse it for their next visit!

Honestly, it was also really funny to see how parents (yes us included) have a tough time letting go and wanting to solve every problem for their kids (queue cutters). It was tough not knowing what was being said in the rooms and not knowing if your child is misbehaving or following instructions correctly because you can’t hear a thing. In fact at some point, I felt like the kids were coping better than us…however it all changed at the 3 hour mark for me because by then I was really too tired to care or hawk over my kids anymore haha so not only was this a lesson for my kids in independence..it was definitely one for Joel and me too. 🙂 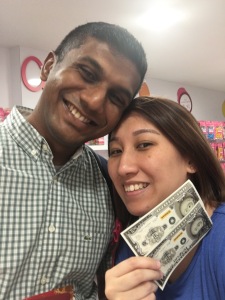