Bella attended her first play (The Gingerbread Man by iTheatre) over the weekend with her big brother Jah and us in tow. :p Well it was technically her second exposure to the world of theatre (her first was with her school last month). But we all know how differently kids behave in school and with their parents.

I was extremely apprehensive about taking her with us, given that she is often little Miss Ants-in-her-pants. However I have to say I was alittle surprised at her level of understanding and enthusiasm.

As usual we arrived about 45 minutes ahead of time which gave both Jah and Bella time to settle down and Bella was more than happy to follow her brother around for the ‘mandatory’ photo-taking. Jah was also extremely happy to have his little sister around to ‘show off to’. 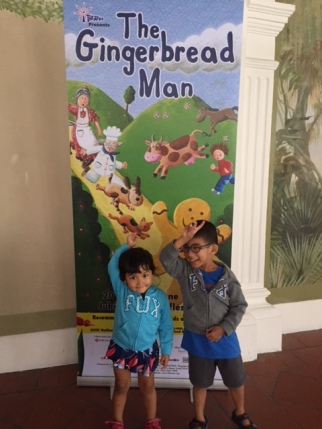 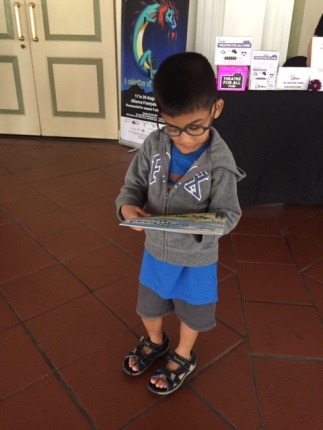 Before even purchasing the tickets, Joel and I had agreed that we would divide and conquer.  We decided that Joel would take Bella outside when she starts to misbehave/ cry. Note I said when and not if because we didn’t expect her to last the entire show at all!

Yes this is how we divide and conquer

But not only did she last through the entire show, she also looked like she enjoyed herself quite abit. The catchy tunes from the show definitely helped! While she was definitely still Miss Ants-in-her-pants, moving from Joel’s lap to her chair more than 10 times in that 50 mins, she was also quite transfixed by what was happening on-stage and was bobbing along to the music at various points of the show. 🙂 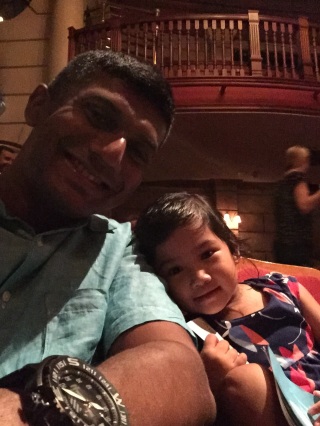 I probably had the better end of the deal because I was in charge of Mr I’m a Big Boy and I can use my indoor voice (Jah) but I was very glad that he was not thrown off by his sister’s constant fidgeting.

I love the fact that the show had so much audience interaction that it was perfectly acceptable and fun to watch Jah and Bella shout out responses to the cast. The audience was a boisterous bunch and the storyline made it fun for them.

The show is targeted at children 3 years and up but given that Bella is just  shy of 2 years old and we made it through ‘unscathed’, I’ll say it would work perfectly fine for a 2 year old as well. That being said, while it was all fun to hear kids shouting out responses and the cast being ever so game to entertain and interact, I fully appreciate and thank the ushers for stepping forward to request that crying babies be soothed at the back or outside the theatre.

We are totally looking forward to bringing Bella with us on all future plays! (in fact we already have 3 of those lined up! 🙂 ) At the end of the day, there is no crying that can’t be soothed by quickly stepping out of the theatre (if and when it happens) and the ability to let both siblings spend a day out at the theaters together far outweighs everything else. 🙂 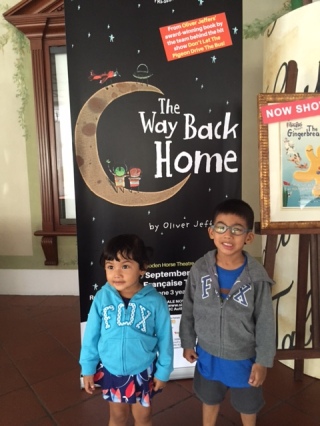 One of our next few adventures 🙂

My theatre boy and theatre girl

The June School Holidays are right round the corner and although Jah and Bella are not old enough to ‘enjoy’ a month long of school holidays (haha they wish!!!) but they will definitely get to enjoy the array of activities that is available out there because of the school holidays.

So if you are wondering what to do or where to bring your kids over the next couple of weeks..here are some of the activity line-ups.

Get set for a rollercoaster of fun and excitement with plenty of activities related to the affable Barney, BJ and Baby Bop. For the third year running, the lovable purple dinosaur will take the stage at City Square Mall with a first ever retro-themed performance – Barney’s Jukebox Party.
The fun continues at City Green park as it transforms into a venue for fun and laughter with the “Good Ole Fun In The Park” retro carnival. Families can look forward to old school carnival games and rides such as the Pirate Ship, Carousel, Bumper Car, Tea Cup and more. 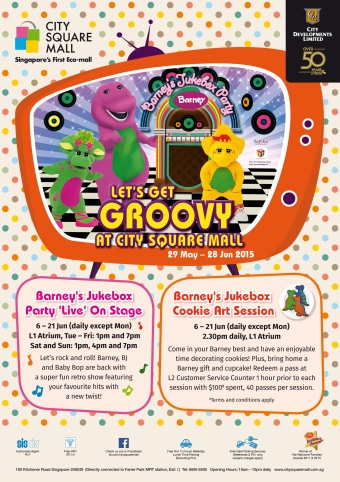 An interactive event that is set in the Dojo training grounds of the Turtles, families and kids can explore the training grounds and participate in a series of secret ninja activities for an added dose of healthy fun. Taking place on weekdays (including Vesak Day) 1pm to 8pm as well as weekends from 11am to 8pm. Entry passes for the Teenage Mutant Ninja Turtles Dojo Experience will be given to patrons with a spend of $20*
This event will feature the following activities:

• Games and activity stations for kids from age six where they have the opportunity to test their courage, teamwork, accuracy and agility through a variety of Turtles-themed games (Ninja Zipline, Tag Team Ninjas, Villains Takedown and Epic String Maze.

• Meet-and-Greet Sessions on the weekends with the different Turtles

The fun family weekend Nickelodeon Slime Cup 2015 event will take place from 11am to 7pm and admission is free. The event will feature:

•   Opening / Closing Ceremony: Nickelodeon Slime Cup 2015 will kick off with an Opening Ceremony featuring all your favourite Nickelodeon characters, followed by a fun dance and sing along session for everyone to participate. The Closing Ceremony will include a prize presentation of the final Soccer Showdown challenge with the ultimate sliming of the winner!

·         Meet-and-Greet Sessions: Have your camera ready to get up close and personal with your favourite Nickelodeon friends at Meet-and-Greet sessions during the event!

·         Mini SEA games in Nickster style: Get excited for the upcoming SEA Games with fun activities and challenges inspired by various sports at the event

·         Slime Throne: Capture the surprised expressions of your kids as they get to experience slime all over their body and look out for our instant photo giveaways!

·         Main Challenge – Soccer Showdown: In each 2 to 2.5-hour session your kids get to participate in different soccer challenges. The challenge is open to all individuals and no pre-registration is required. There will be 3 sessions daily with 3 winners per session.

Theatre boy (Jah) and I were invited by iTheatre to their latest production Aesop’s Fables at the Raffles Hotel Jubilee Hall and we decided to bring Papa Joel along. Papa Joel usually hates it when I ask him to join me for a play or musical because he just doesn’t have the attention span for it :p But he was more than willing to come for this production because he wanted to witness Jah’s interest in theatre for himself.

This is our second time at an iTheatre production (the first was Hop and Honk) and I have to say that you realize how super passionate they are for theatre and super good at what they do when you see the effort that goes into their programme booklet, stage set and props. 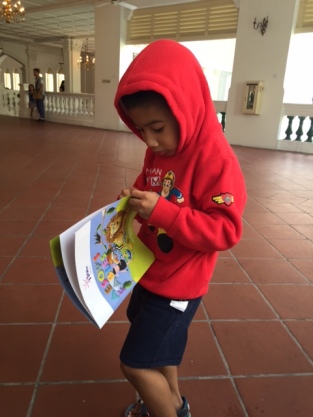 Checking out the programme and activities in the booklet 🙂

Thanks for the goodie bag iTheatre!

The 50 minutes show (no intervals) revolved around a theatre troupe, the Crowfoot Troupe taking us through 8 fantastic fables. The show was filled with catchy tunes, intelligent humor and great acting! Jah had declared a few times to me that he was scared of some of the characters even though he understood that it was all pretend, just like in his speech and drama classes. He even said “the uncles and aunties act so well!” :p

The show is suitable for theatre goers ages 3 years and up. Although they do say till 13, I’ll have to say “up” because adults like Papa Joel and I enjoyed ourselves immensely too! Papa Joel actually thanked me for bringing him along for the show!

Not only did I enjoy the production elements of the show, I also truly enjoyed the storyline. It was nice to be reminded of the moral of the story behind each Aesop’s Fable. Yes the ones we had learnt as children but somehow had forgotten that they apply to us even in today’s world. It also has given me a lot of ‘material’ to work with for the next couple of months when it comes to introducing Aesop’s Fables to Jah and telling/ reminding him of the moral of each story.

So if you are looking for some good fun for the family and something educational for the little ones then check out iTheatre’s Aesop’s Fables! We can’t wait to catch Gingerbread Man by iTheatre when it premieres in May! 🙂

“When you try to please everyone, you end up pleasing no one.”

“Never swop your friends for enemies”

Do you have a favourite fairy tale or fable as a kid? A story so ingrained in your memory that you find yourself repeating them to your kids even without the help of a story book.

I recently realized that Jah really loves hearing the ‘traditional’ stories that we used to hear of as a little kids. The Three Little Pigs, Little Red Riding Hood and the Frog Prince are just some of his favourites. Amidst all the new cartoon storylines with fancy songs and dance steps, we have seemingly neglected to tell the age old fables teaching good morals and values. 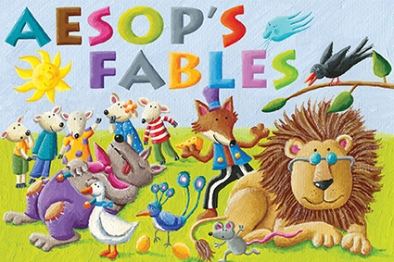 That’s why I am really looking forward to iTheatre’s new production, Aesop’s Fables which will be opening on 26 February 2015. As the name suggest, it is a theatre play showcasing some of Aesop’s famous stories, using marvelous mask, puppetry and live song and dance. 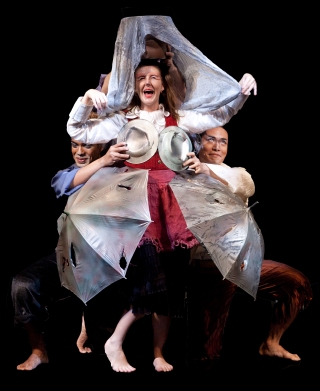 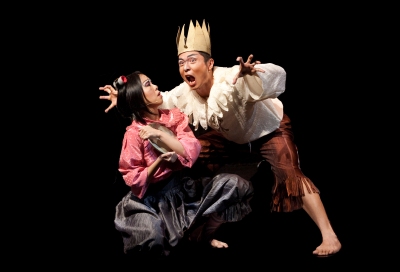 A perfect combination of theatre, fables and music for my theatre boy!

So if you are looking to introduce your child to some of Aesop’s Fables, check out the poster below for details on the show and how to book your tickets. 🙂

Oh and I wonder how Jah will react when he finds out that there is actually a story that revolves around the Gingerbread Man! Coming soon in an iTheatre production in May!

Stay tuned for our review on iTheatre’s Aesop’s Fables! 🙂

Hop and Honk, a musical weaving two familiar tales – the Ugly Duckling and the Frog Prince will be on at the Drama Centre Theatre, National Libray from 29 Oct to 15 Nov 2014. 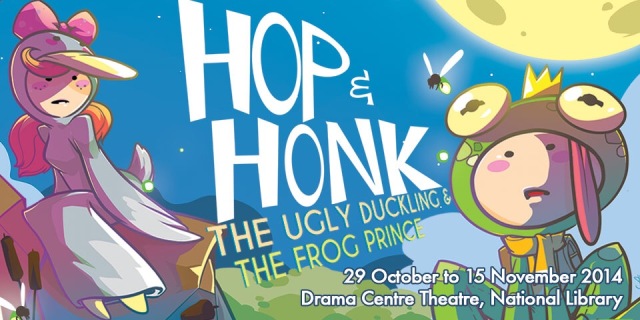 I’m excited to see how they have merged the 2 stories to teach key values including racial harmony, tolerance and understanding, as well as self-worth and self-esteem, team work and creative thinking.

If you are looking for some entertainment for the kids, Hop and Honk might just be the thing!
Recommended for 4 years old to 18 years old and families.

Stay tuned for our review of the musical on Opening Day!