We attended our first Disney on Ice 2 years ago with Jah when he was a teeny weeny little baby ok maybe I exaggerate, he was almost 3 years old then. So we figured it was about time for Bella to have her first Disney on Ice experience since she would be turning 3 in 2 months! Oh how time flies…

With Bella all decked out in her Princess Anna costume (never say never! :p) and Jah in his Marvel Avengers outfit (yes this boy is still holding out for a superhero show), we headed for Disney On Ice presents Magical Ice Festival at the Singapore Indoor Stadium.

Before we go into the highlights of the show proper, let me take you through some tips that we learnt from today’s experience

While parking didn’t seem like too much of an issue and there was more than enough parking across the road at Kallang Leisure Park, getting a lot right in front of the stadium was perfect for ushering kiddos quickly into the car after a 2 hour long show. (Trust me the parents will need it even if the kids don’t 😉 ) Also coming early would help you beat the crowd queuing to for the bag check and entry and give you some time to leisurely check out the merchandise and F&B.

Bring cash for the merchandise and snacks.

There are some pretty cute and interesting merchandise. We got Jah and Bella a pair of binoculars at $16 each. Perfect for keeping them busy!

Snacks and drinks are also sold inside.

In fact if you are seated in the first few rows, you will be able to get them for the mobile kiosk in front of the rink. Oh and in case your kids ask for popcorn and you do not want to indulge in such a big tub, there are also smaller boxes available for sale (think movie theatre size) 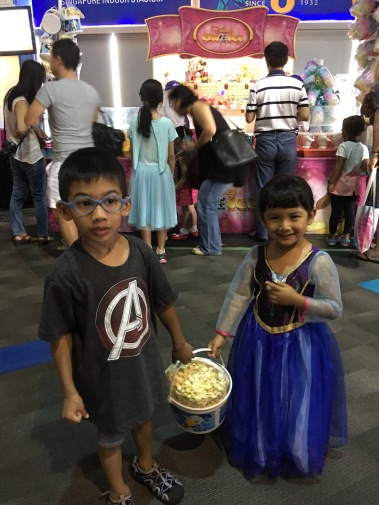 But honestly I preferred to go without because they don’t really fit well on the seats. Given that half the audience were kids, it was pretty easy to ensure minimal blockage by seating them strategically behind another kid.

Go ahead, prep your kids for that big Frozen Spectacular thats happening at the end of the show.

Yes 1.5 hours might seem like a long time time in ‘kids light years’ to be waiting for something and I was afraid to oversell what was coming at the end so I had pretty restless frozen hungry kids towards the end of it all. If I had known any better, I would have promised them a Frozen extravaganza which it turned out to be. 🙂

Now for the HIGHLIGHTS!!!

We absolutely love the fact that there were storylines to follow. Rather than a random act or song, we got to revisit a few acts from each tale. Awesome for those who were familiar with the stories because we could enjoy all the little details and perfect for this who weren’t familiar because they were introduced to the likes of The Little Mermaid, Tangled, Beauty and the Beast and Frozen. Who said you had to be a fan to enjoy it! Incredible storytelling!

The aerial stunts, the ice skating techniques and the synchronised choreography. The spins, twirls, lifts and flips! I can tell you that the kids were not the only ones wowed.

The backdrop, costumes, props and effects were phenomenal! Fans of the Disney tales would notice the details and the larger than life similarities. Fireworks, floating lanterns, snow! The amount of snow that fell on the rink during the Frozen segment was truly an effect alright! Without giving too much away, I actually thought that it was quite interesting how they presented a Frozen Anna.

Bella was captivated as all the other young princesses were and Jah was hooked on the fight scenes as all young princes/ superheroes would be. :p

All in all, it was truly a Disney experience!

Disney on Ice presents Magical Ice Festival will be in town from now till 20 March 2016.

Tickets for Disney On Ice presents Magical Ice Festival can be purchased online via http://www.sportshubtix.sg.


Disclosure: We received complimentary VIP tickets to attend Disney on Ice presents Magical Ice Festival for a media review. No monetary compensation was received and all opinions are my own.