Jah and I recently went on a mother-son date to catch Shrek the Musical at the Marina Bay Sands.It was the first time that we/ Jah was catching a full-on musical (2 hours and 25 mins long!) together and at a time slot that would take him way past his bedtime of 9pm. But oh we had so much fun! At the risk of revealing too much about the show, I will attempt to share our 5 favourite things about our time at Shrek the Musical (not in order of preference). 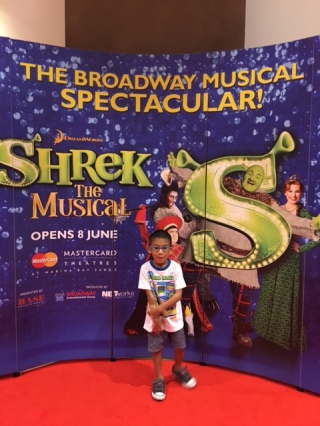 We were seated in the second row of the theatre and I couldn’t resist pointing out to Jah that there was an orchestra ‘beneath the stage’. He took a peek into the ‘big hole’ in front of the stage and was excited to find that there were many ‘uncles’ playing different instruments. I think that is when it hit him that every note and tune played during the musical, was played by a live orchestra…nice..:)

If we had to choose our favourite character, it would be the Donkey. Ironically the donkey was one of my least favourite characters in the movie..but his antics, humour and voice really brought the show to a whole different level…we were really tickled by his banter with Shrek! 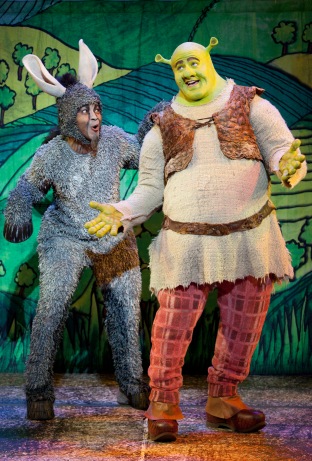 3. The Gingerbread Man…the real one…

What real one you say? The actual gingerbread cookie which they were selling at the concession stand. Jah had 1 before the show started and another 2 at the interval…yes thats how much he liked it so I say kudos for having theme related snacks which apparently tasted yummy and was priced really reasonably. Big win for Jah and Mummy!. 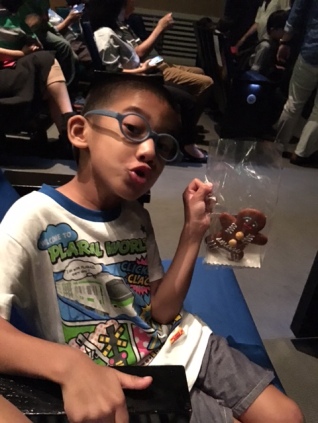 Jah had asked me before the show if Lord Farquaad was played by a ‘toy’. He remembered watching the commercial for the musical and said that it was impossible for Lord Farquaad to be an adult person because he was really small….he went to the musical wanting to ‘solve this mystery’

He finally understood how the effect was achieved after watching the show and was very impressed by it. Even I was impressed by it and all I can say is that it certainly took alot talent and dedication to do it!

Lastly we were super impressed by the effects – the combination of  traditional props and technology. The music was also really catchy! Jah was more than happy to groove to the finale song that he didn’t ask to leave even after the curtains came down. (He is usually quite the impatient to leave once he senses that a show has ended).

So yes I have to declare our first proper musical a success! And Jah is already setting his next milestone challenge…a musical 3 hours long..:p

Grab your tickets before the show ends its run!

Disclosure: We received complimentary tickets to attend Shrek the Musical presented by BASE Entertainment Asia for a media review. No monetary compensation was received and all opinions are my own.

I remember it was a long long time ago when the first Shrek movie hit the big screens..2001 to be exact. It was definitely pre-kids for me, in fact I wasn’t even an adult yet! But Shrek was truly a fairy tale of a different kind, one with an unlikely hero and a sense of humour. I also remembered my sister in law using one of the songs from the Shrek soundtrack for her wedding march-in, some years later. After all, Shrek the movie did have a pretty awesome soundtrack too.

Fast forward 15 years later to post kids me and its not hard to believe that my kids love Shrek too. We even went on a cruise in pursuit of them. :p 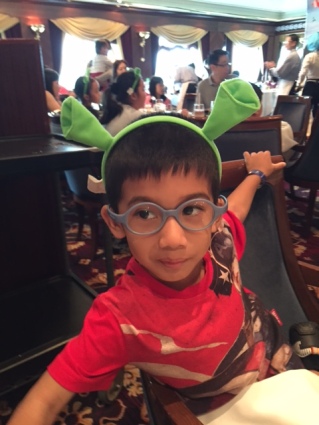 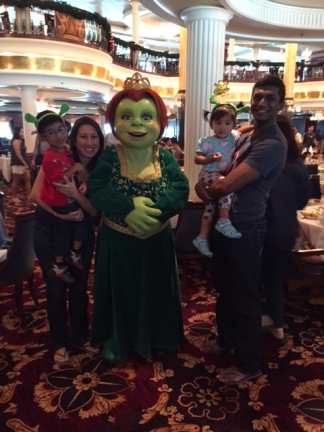 Shrek The Musical based on the Oscar winning DreamWorks Animation film is coming to Singapore for the first time as part of its first ever international tour. It’s no surprise that the kids have requested to watch Shrek the Musical, the moment they saw its posters hanging from the beams at the Marina Bay Sands. To be honest, I have been bombarded with these ‘demands’ every single time, we pass a poster, spot a brochure at Sistic or see a commercial on TV.

And can you blame them? After watching the animation version of Shrek and his friends on the big and small screen countless times, imagine the appeal of watching ‘real life’ Shrek, Princess Fiona and everyone from Far Far Away!! 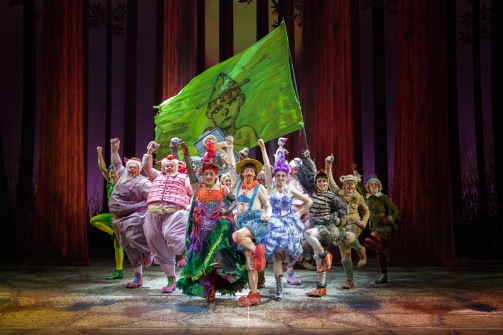 This live adaptation of the popular animation Shrek brings the hilarious story of everyone’s favorite ogre on stage. For those of you who may not be as familiar with the story, in a far away kingdom turned upside down, things get ugly when an ogre – not a handsome prince – shows up to rescue a feisty princess. Throw in a donkey that does not keep quiet, a villain with a short temper, a cookie with an attitude and over a dozen other fairy tale misfits, and you’ve got the kind of mess that calls for a real hero. Luckily, there’s one on hand and his name is Shrek. 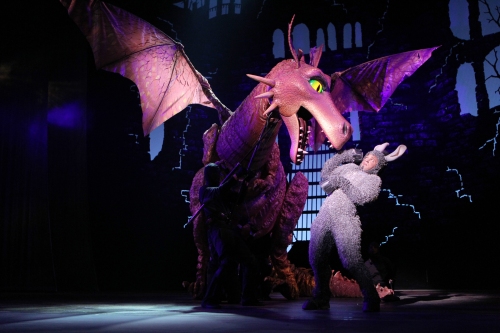 We can’t wait to catch this ‘Shrektacular’ when it comes to our shores in June and just in time for the school holidays. So for those of you who are still wondering what to do with the kids during the June holidays, tickets are on sale now from Sistic.
When: 8 Jun 2016 onwards

Grab your tickets soon and we’ll see you there!