The last weekend was quite the week of feasting in fact we decided to attempt something which we have never done with the kids before. A buffet!!!!!  Ok to be fair this was their 2nd buffet but their 1st with just us and with no aunties or uncles to distract them while mummy and papa gets to eat. So I was abit apprehensive because I really really needed both kids to be cooperative, like the food and the environment and allow us to at least have a decent shot at the buffet table. It didn’t help that Jah was being extremely disruptive just before lunch and Joel had suggested no less than 5 times that we should perhaps postpone the buffet lunch to another day. I was determined to have my Nonya buffet lunch that day but I was also really stressed out and worried that I was going to end up with an “I told you so” from Joel. Thankfully it turned out fine..better than fine.

We made a reservation for 12pm at the Katong Kitchen located on the 4th floor of Katong Village Hotel. We were 10 minutes early and asked to sit around and wait while the staff continued to prep the buffet table. Jah was immediately drawn to the seafood table when he saw the mussels and Joel and I were really surprised that he actually went on to eating quite a number of these cold mussels.

Eager for 12pm to come

The spread was mainly Peranakan cuisine ranging from hot food buffet spread to a laksa stand as well as a DIY Rojak and Kueh Pie Tee. However they also injected alittle variety by having a seafood table, sushi area, salad bar, waffles stand and a dessert table which had a mix of nonya desserts as well as your regular cakes.

Normally the first thing I go for but I didn’t even get the chance to eat these because the rest of the spread was just too good!

I have to say I was very impressed with the quality of the food! While I probably would not equate it to the standard of a Peranakan restaurants. It was nevertheless a good variety of food with decent quality and priced very affordably. I usually don’t like going for buffets because 1) you don’t get to eat leisurely with kids and 2) it is always a struggle between variety and quality but I would say the buffet at Katong Kitchen hit the spot. There was really something for everyone! Even my pickiest child (Jah) ate…a lot!

Sure there were a few spicy dishes which the kids could not take but there were more than enough kid friendly items to keep them full and enticed. Jah enjoyed his silverfish fried rice with freshly bbq-ed satay as well as his cold mussels. He also enjoyed freshly baked waffles served with chocolate soft serve ice-cream that he got to decorate with toppings and drizzle with chocolate sauce and he got to make his own ice-kachang as well (ok mummy made the ice kachang). Bella savoured her ee-fu noodles and well ate everything else including tons of keropok (minus the sambal which was available in abundance). 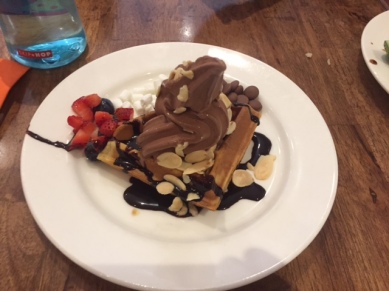 Everyone had their own waffle with soft serve ice-cream 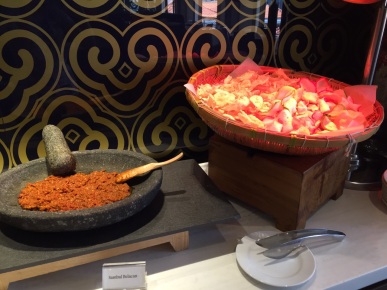 Keropok with an abundance of sambal

The adults ate everything and I even got to make rojak and kueh pie tee for the family by following the simple instructions they had on display. We spent a leisurely 1.5 to 2 hours at lunch which is unheard of in our family but everyone had so much fun and the staff were ever helpful and always on hand. Oh and before I forget, do order their own fruity ice tea concoction! It was simple thirst quenching with a little fizz..totally love! In fact Jah loved it so much that he was competing with us for refills. 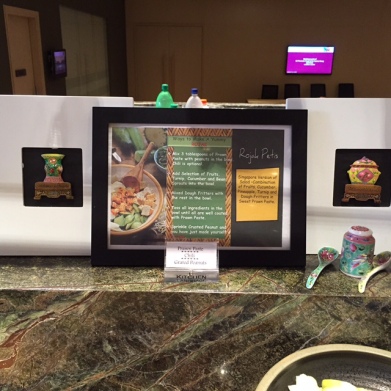