So yes, we completed our big move recently (with one more in the pipeline) but we are all good for now and so I would like to take the time to reflect and share some tips on how we survived our move with kids. Some of these tips were serious points of contention between me and Joel when we couldn’t agree if we should attempt the move in that way. While others were mistakes that we learnt from. 🙂 So here are some of our tips on how to sanely get through a move with kids and please read till the end if you want to find out how we prepped the kids for the move. 🙂

1) Always hire a moving company to relocate you. If this seems like a no-brainer then I would go one step further to say, hire the moving company to do your packing for you! This worked wonders for us because we only had to pack away our personal and essential items (and trust me even that takes awhile). The movers did all the heavy stuff like packing up our storeroom, kitchen, wardrobes and all the knick knacks which would have taken us weeks!!!! And yes you don’t have the luxury of packing up over weeks and living out of boxes or suitcases if you have little monkeys children running around…:p

2) Always move on a weekday when the kids are in school or childcare. Yes while it might be tempting to save a day of leave and just do it over the weekend. It will be a lot less stressful if the kids were out of your hair and you didn’t have to think of which kid has to come with you or when you need to get lunch for them. If you don’t have the option of school or childcare then get help from someone to babysit but bottomline is try not to have them around as you are making that physical move (i.e 9am to 5pm)

3) Prepack a few days worth of clothes, fresh towels, PJs etc, as if you were going away for a short holiday or staycation. Live out of that suitcase the night before the move and for how many more days you forsee the unpacking to take. This is especially important when you have kids because kids can’t live out of boxes full stop. They will not appreciate you, opening boxes after boxes to find their favourite stuff toy or that school uniform that they need to wear to school tomorrow.

4) Try your best to be present when your movers are packing up for you and then be as specific as possible when labeling the boxes. This is also applicable if you were packing on your own. Trust me a box that says Storeroom versus a box that says Storeroom – Shoes, makes a world of a difference. Especially when you have 20 boxes named store room which have been moved into your new storeroom and you realize at 10pm that 1 of those 20 boxes contains shoes which you need to wear to work tomorrow. Happy searching indeed! 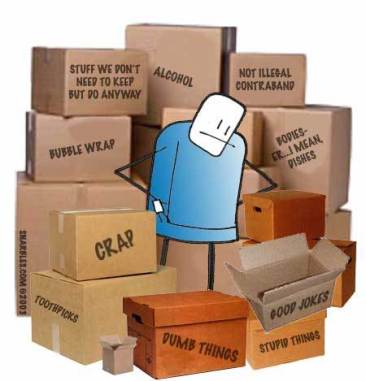 5) Always take leave the day after you move and this also means, do not move on a Friday! Kids are not fun to have around the house when there are tons of unpack boxes stacked up to the ceiling in your bedrooms, living room and kitchen. And unless you were living in a relatively empty house before (we were living in a toyshop) or you move at superhero break neck unpacking speed, there is no way that your house will be ‘unpacked’ and freed of boxes during the first 24 hours of the move. Yes, so take your leave and get cracking! And after that if you think you need to recover from the move then take another day of leave again. :p So my recommendation is that a move with children would require you to take about 3 days of leave 😉

6) Ensure that the kids rooms are the first rooms which you make live-able again. If there is 1 thing which you absolutely must accomplish/ clear/ unpack/ get ready in the new house whilst moving, make it the kids room. This will give them a place to hangout when they come home and not have the boxes in the way or they in the way of the boxes. This also helps with the emotional part which I am going to touch on next. 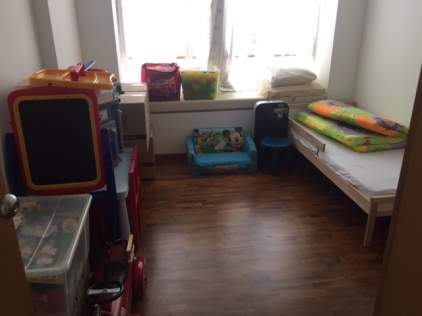 Now that we got the logistical nightmare stuff out of the way. Lets take abit about the emotional side of things. If your kid is 0 to 2 years old like Bella, she will unlikely be too affected by the move. So long as she sees the same usual faces (family members) and given her same comforts (pacifier, blankie, stuff toy etc – that is why it is important to pack them personally into your suitcase). Kids of that age should pretty much bounced right back (literally) and she would probably never ever remember the ‘old house’.

Kids who are older than 3 years old (like Jah) might find it abit more of a shock to their system and might possibly get emotional about things. The way to deal with it is to prep, talk, listen and prep somemore. We prep Jah very very early on when we knew we were going to move even as early as when we were marketing our place for sale.

He was told why strangers were coming to his house and his room to look around. He was told that it was necessary if he wanted to move to his new house. We ‘sold’ him the good things about the new house and the exciting changes we could make to his room. He talked to him, we ‘prepped’ him and we made sure we listened to what he had to say. Not that there was another other option but the moment he sounded unsure or apprehensive about the move, we listened and we addressed and tried to steer things towards the positive. We also got him to reassure us back that he understood what this move etc was about.

Before the movers came to pack things up in boxes, we prepped him. The night before the move, we prepped him. When he was leaving for school on the morning of the move, we prepped him and reminded him that he would not be coming back to this house after school tonight. I think as adults we sometimes get so caught up in the big things, the obvious things, the great move that we forget it might be confusing for the little one to go off to school from one house and then to never return there again. There can never be too much prepping, at least not for this. :p

Which brings me back to some of my tips about labeling boxes well and taking leave to unpack quickly because the faster you revert to some semblance of normal life for them and allow them to be surrounded by familiar items (clothes, beds, toys, bed sheets, blankets, utensils) etc, the faster they adapt to the new ‘shell’ or environment.

We are really fortunate that both our kids took very well to the move. In fact, I am amazed at how forward looking Jah is. When asked if he misses his old house and whether he would like to say goodbye ‘Punggol’ House as we pass it on the expressway. His response was, “no, no need to say good bye to Punggol House mummy, its Hello! Temporary House!” We are really glad that they have transitioned so well and I would like to think some or all of that prepping has help to ease the transition and I hope these tips will help you and I again for our next move….Until the next move 🙂