JahBella’s first encounter with a mall’s Live Show/ Meet & Greet was almost a year ago. My then wide-eyed babies were thrilled at meeting a ‘live’ cartoon character that they recognized from TV however the experience itself was somewhat underwhelming, with the live show being only 10 minutes long. Safe to say, I have been very hesistant since then to bring them for any Live Shows/ Meet & Greet.

After almost a year since their first rather disappointing encounter, we finally mustered enough courage to brave the crowds and take a ‘leap of faith’ :p We were invited to attend City Square Mall’s The Chuggington Winter Snow Party and I have to say it was awesome fun! There was song and dance, playful banter, a light-up and even a snowy finale! Both Jah and Bella were in their own little world and while Jah is still pretty shy when it comes to following the dance moves, he was really transfixed on the show. What I really liked about the show was the fact that the cast came on stage to engage restless kids, 10 minutes before the actual showtime. Consider it a pre-quel but it was very helpful for kids who have been waiting for almost 45 minutes to an hour. A useful tip which I just ‘discovered’ yesterday, is to provide your kid with your own pre-quel. We let Jah watch an episode of Chuggington on Joel’s handphone and he was able to be kept entertained. He only switched it off when Lorie appeared on stage during the pre-show warm up.

Live shows are not just for the big kids! 🙂 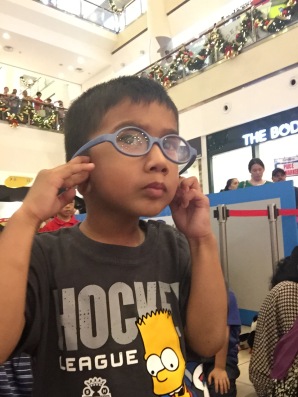 This is his focus face, not angry face 😉

Lots of Chuggington photo ops in the mall

I also have to say that City Square Mall probably has one of the better Christmas experiences this year. Apart from the Live Show/ Meet & Greet that other malls may also do, City Square Mall has a host of fringe activities which is happening outside on the City Green (just outside the mall). The activities include Kiddy Carnival Rides, Christmas Light Show and Snow Playtime and the Choo-Choo City Express. We were fortunate that the rain settled down while we were watching the live show and ended just in time for JahBella to enjoy the Choo-Choo City Express and the Snow Playtime. JahBella really enjoyed their train ride and while I didn’t think much of it at first, I could see why the kids were so taken by it. The train with a real driver and not just a kiddy train ride on little tracks, would take you round the entire City Green (3 times!) and JahBella were happily taking in the sights and people-watching, even I enjoyed it! While I didn’t allow Jah to play in the ‘snow’/foam (sorry mummy is a bit of a control freak with these things) but I saw tons of kids enjoying the ‘snow’ and Jah was equally happy and contented to have me carry him and get ‘snow’ on our hair, face and eyelashes. 🙂

Baby its cold outside! 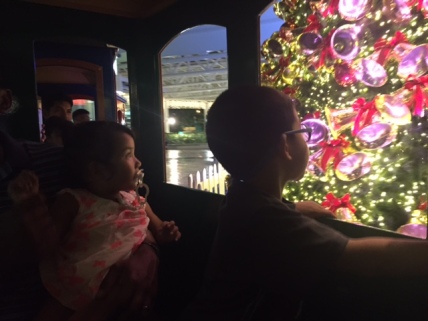 Taking in the lovely sights!

The Chuggington Winter Snow Party will run from 6 December to 21 December (daily except Monday) at City Square Mall. Fans can also get up close and snap a family photo with their favourite characters by redeeming a Meet & Greet Pass with $50 spent in the mall (terms and conditions apply).

Chugg-ful of Fun At The Park will be on from 14 November to 28 December at the City Green(Park).

Interested to cuddle up with a Koko, Wilson or Brewster cushion? You can redeem an exclusive

Chuggington cushion with $200* ($250* if inclusive of NTUC FairPrice receipts) spent!

Insisting on hugging his Koko cushion and even for bedtime…zzzz