Before I start on this post, I have to apologise for the lack of photos as our camera’s battery went dead on us and well handphones and theme park/ water theme park don’t agree. :p

Adventure World is a giant theme park that has a big water park area and a nice rides area suited for the young ones. The place also has huge empty grass patches throughout the park where families can set up shop. I seriously have no idea why we never came to this place in all our years of holidaying in Perth! 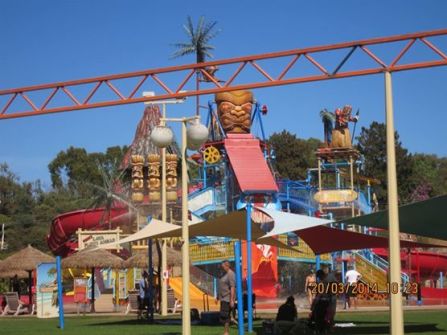 Adventure World is really a place for people of all ages. I would recommend coming early so that you can find a good spot especially if you are coming during the weekends. A lot of local families bring their own ice cooler box, little camping chairs etc, but a picnic map, towels and a change of clothing is all you need if you want to travel light.

We parked ourselves in front of the big water play area which was relatively shaded. That area is also closed by to the toilets, lockers and some food kiosk. We attempted the big water play area a few times but chickened out everytime some water hit us as it was simply too cold. Yes our photos seem to suggest that it was warm and sunny but I remember it was approximately 23 degrees or so. The kiddy/ toddler water play area was 100m away and the kids spent some time there but yes it got cold after a while too. I’m guessing all these will be perfect and very popular in summer. 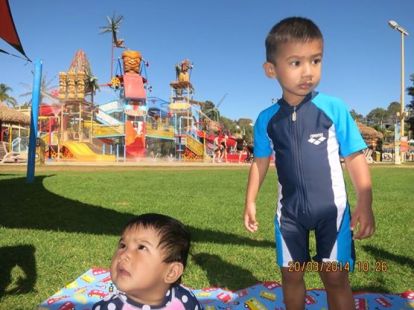 From the kiddy waterplay area, you could see some of the rides available – Old school Viking ship, rickety roller coaster and a spinning tea cup ride to name a few. I will always remember Adventure World as the place where Jah experienced his first roller-coaster ride. I really don’t know what got into him but he wanted to try it and he also wanted to try the Viking Ship. I was petrified during the rides, petrified for him and that he would freak out in the midst of it. He took it well though and endured the rides till the end, but when asked if he wanted to repeat it, he gave politely or not so politely declined ;).  The only ride that Jah wanted to go on repeatedly was a ride that took us around the park and it gave us a bird’s eye view of everything from above. The only downside for me and Joel was the fact that we had to pedal it ourselves!!! It was a 2 seater which meant that I had no help from the one sitting next to me (he couldn’t even reach the pedals!). It also doesn’t help if you have someone/ two teenagers in the ‘car’ behind you, going extremely fast and chasing you down. Come on! No fair!

For those after a thrill, the park also has humongous slides and it was very very popular with the teenagers. I really wanted to give it a shot but I doubt Jah would have allowed me. Ok I asked him for permission but he said no. :p

Adventure World will definitely be back on our itinerary again the next time we return to Perth. And while we have never been to Perth in summer, this might be a tempting and good enough reason to.

Next Up – Final post from our Perth Series – Hilary’s