Our car ride to the Maze would be the longest drive of our entire trip and with not much to see on the roads as we approached our destination. So I was alittle worried as we were driving the last 20km towards the Maze. Was it going to be some backward, boring little place? Was there going to be anything good to keep the kids occupied? I was getting less and less confident about this attraction by the minute but boy was I wrong. The moment we turned into the parking lot, we noticed tons of families with big cooler boxes, picnic mats, food and their swim stuff!!! It also happened to be a nice hot day but I had chosen today not to bring their swim stuff. 😦

The Maze is not just as its name suggest, it is actually a huge park with yes mazes, children’s playground, big areas for picnics and even BBQ facilities if you fancy grilling your own food as well as a newly opened waterplay area! Jah went berserk when he realized that we were not going to the waterplay area and I had to really come up with some fantastic reason/ excuse to appease him and lead him away from the area (which by the way looked like a splashing good time!)

We headed into the ‘dry’ area and parked ourselves between the playground area and the Giant Jumping Pillow. It was a lot of fun for kids and adults to just jump and bounce around. It can in fact get abit too aggressive for my old bones. :p I like that they also had certain hours which were reserved for toddlers so that the bigger kids had to either refrain or be extra careful when jumping around. There is even an area where you can pay to go on a camel ride which was exactly what Jah and I did! We also attempted their Maze which was really tough!!! 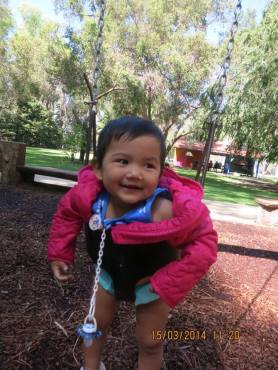 Baby friendly swings are the best!

I’ll crawl while my brother jumps!

Visitors are allowed to bring their own food for picnics/ BBQ or you could also purchase your lunch from Café Iguana (pretty decent food) and there are also no shortage of drinks/ ice-cream kiosk around. This was where Joel introduced Jah to his favourite ice-cream – Golden Gaytime! Yums! Overall an awesome place to spend the day and would have been worth another trip to try out their waterplay area if only we had more days.

That evening, we headed to Northbridge to get our Chinese food fix. Yes what do Singaporeans do when they are on holiday? Look for Chinese food! No but seriously, this is the only place I can get a good Salt and Pepper chicken so there was no way that I was going to leave without having it at least once. And guess what my little boy was also missing his rice so he was enjoying his meal and when Jah enjoys his meal, everyone is happy! :p The key to bringing kids to Northbridge for Chinese food is get there early before it gets crowded or rowdy. We walked in at about 615pm and was done with dinner by 7pm.

Having a taste of his first chrysanthemum tea 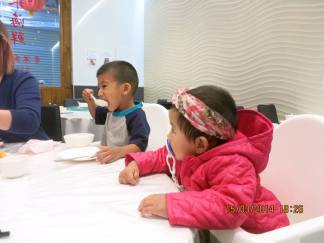 Channeling the chinese boy in him

We noticed a San Churros Chocolateria outlet near our carpark before dinner and decided to head there for some dessert (hot chocolate and a nice chocolate fondue). Needless to say, everyone was super happy! Thank goodness the kids managed to sleep that night :p

Why do the children not look happy after chocolate..lol

Next Up in the Perth Series….Penguin Island

One thought on “The Maze, Chinese Food and San Churros @ Northbridge – Perth (March 2014)”