We brought Jah for his 2nd dental appointment yesterday. He had his first dental check at 3 years old and so this was long overdue because we had to postpone a Nov appointment due to HFMD.

Prior to this appointment, we were concerned about the little cavity that the dentist had found on one of his tooth a year ago. We were told to allow it to remineralise by applying fluoride on it and not eating/ drinking milk after the last brush at night. We were worried that it might have gotten worse since he had only recently agreed to stop taking his milk after his last brush.

Little did we know that the cavity was going to be the least of our concerns. During his first appointment, the dentist also pointed out that one of his front tooth had turned ‘grey’ which usually is the sign of a dead nerve/ dead tooth after trauma. We recalled that Jah had a bump to the chin when he was about 2 years old and that was probably the trauma that had caused the ‘dead or dying nerve’

At that point we were told that as long as there was no inflammation, gum swelling, bleeding or pus from the gums then everything should be fine. (Infection resulting from injury to the teeth could flare up anytime within 3 years of the injury).

Jah hadn’t exhibit any of the above warning signs so we thought that we were in the clear of any abscess to his tooth. Fortunately or unfortunately, Bella head butted him in the teeth 2 days before this 2nd appointment. This led to his lips and gums bruising and swelling up. When the dentist saw this, she was immediately concerned as she was now unable to tell if the swelling was purely from the recent injury or that he might have had swelling prior already. 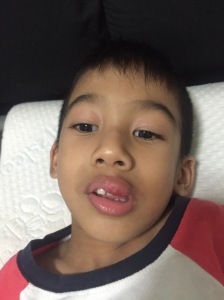 The swelling immediately after his sister headbutted him

Long story short, she decided to X-ray his front 4 teeth and found that the root of 1 of front tooth was showing signs of reabsorption (which meant that it could fall off sooner rather than later) and that the root of the ‘dying / dead’ tooth wasn’t as ‘clear’ as the rest anymore.

The swelling on the day of his appointment. You don’t see anything right? But apparently enough swelling and bruising underneath for her to be concerned.

On top of that, she found that an abscess had developed in the gums close to the ‘dying/ dead’ tooth. This meant that it was probably a matter of time before it ‘erupted’ and his gums would start swelling and giving out pus. The way to prevent further damage or eventual pain would be to pull out both front teeth! Yes lose the two front tooth now and wait 2-3 years for the adult ones to come out! Oh my goodness! (The treatment for baby tooth is extraction whereas the treatment for an adult tooth would usually be a root canal procedure)

However as she was unable to tell how serious his situation was due to the new injury, she wanted to wait and see if the swelling would subside. It should subside within 2 weeks if it was purely due to the recent injury. So now we are waiting for the swelling to subside and we are due to have a review in a month’s time.

This review would essentially tell us if there is any immediate need to remove his 2 front teeth or if we can wait it out a little while more and pray that the abscess does not erupt before his 2 front tooth decide to drop off naturally when he reaches approximately 7 years old.

We are prepping ourselves for the possibility that both teeth might need to go sooner rather than later and he would need to take the GA route (which is another nightmare) on top of not having his 2 front teeth for a good 3 years. 😦

Well on the bright side, the rest of his teeth look a-ok and his earlier cavity has not grown any bigger so we are all good as long as we are ok with not having his two front teeth for Christmas (or the next few Christmases)

Here are some tips for fellow parents when it comes to dental reviews and mouth injuries that we picked up from the dentist and from our own research.

1) You might like to bring your little ones for their first dental appointment around 3 years old. This will help you deduct any potential problems and nip the problem in the bud or at least take preventive actions

2) If your kid has had a mouth injury or trauma to the mouth/ teeth, do look out for any swelling, fever or pus and see a doctor/ dentist if there are these signs.

3) If your kid has had a mouth injury or trauma to the mouth/ teeth, look out for any tooth darkening or greying as this is a sign of a dying or dead nerve/ tooth. If you do spot the tooth darkening, then start monitoring your kid’s mouth for abscess (pus from the gums or swelling). Bring your kid to the dentist immediately if you spot any of the symptoms. Remember these symptoms can show up within 3 years of the injury or trauma.

5) If your kid has a cavity, you can apply a dab of fluoride toothpaste on the cavity after brushing. You do not need to rinse off that dab of toothpaste. This is to help the cavity remineralise and keep it from growing bigger. That being said, please bring your child to a dentist if you spot cavities as they would be in the best position to treat in case the cavity is a lot worse than what we have in Jah’s case.

6) Last but not least, try not to use the dentist as scare tactics for the kids as it would make your job of taking them to one in future a lot harder. Tell them that the dentist is there to help them kill off the germs in their mouths. Works especially well for boys when you use shooting and battling germs as an scenario. 🙂

Wish us luck for our review and if you do spot Jah without his 2 front teeth then you know why..Smile away little ones!