During our dating years, it was extremely hard to convince Joel to holiday in Hong Kong and I didn’t quite know the reason for his reluctance. I only found out the reason for it when he finally agreed to visit Hong Kong in 2009. The first thing he said to me as our taxi pulled out of the airport was, “wow! this isn’t like Young and Dangerous at all!” (Yes so now you know which era we are from :p).

So anyway he has been quite in love with Hong Kong since then and  it was extremely easy to convince him to bring the kids there (on such short notice) despite just returning from our Perth holiday. 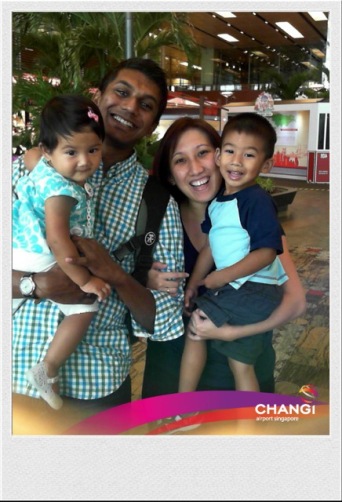 Family Pic before we jet off! 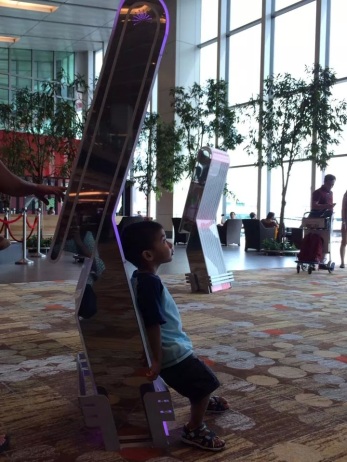 Admiring the Social Tree at T1

Stickers are extremely serous business! Do not let your child discover your secret sticker stash pre-flight!

Pushing his sister around HK Airport

So what is there do do with kids in Hong Kong you ask. Everyone would tell you to “Eat and Shop” however we could only manage the ‘eat’, ‘go to Disneyland’ and ‘eat somemore’.

While staying at one of the Disneyland would probably seem like the most obvious choice, we decided to stay in Mongkok instead. We chose the Langham Place Mongkok for its location and also because the the range of room types that were available for families. (Also the hotels at Disneyland were extremely expensive if we wanted to cater for 3 adults and 2 kids 😦 )

We ended up with two rooms that were inter-connected which gave us our privacy but still allowed us to holiday as a family. Staying at Langham Place also allowed us to head down to the streets at night when the kids were asleep and our helper could still watch out for Jah who was in our room.

We managed to go for massages and awesome suppers without worrying about traffic. Staying in Mongkok also meant that we could have our pick of the local food with the kids without worrying that it was past their bedtime (after all we were only a few streets away from our hotel).

Room 2 with a king size bed

The kids were really delighted by the food that we had (dim sum, char chant eng sets and roasted goose rice!) What can I say, my kids love their Chinese food!

Picking up dinner 5 minutes after we checked in

Famished after his flight – we managed to pick up dinner right in front of our hotel..yummy! 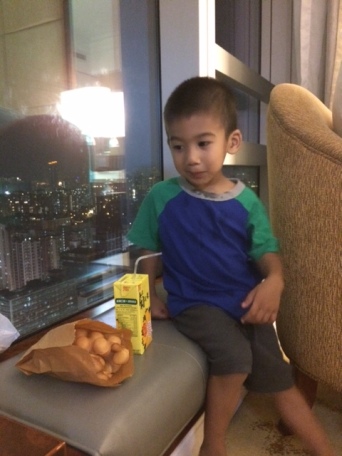 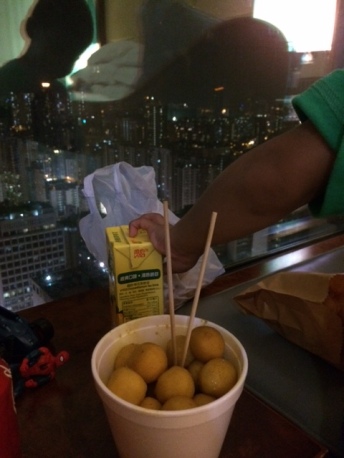 Snow Ice at a Dessert shop, a short walk from our hotel 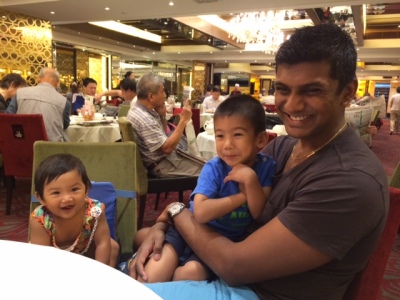 I apologise for the lack of char chan teng pictures. There was a really yummy place in front of our hotel too but yes we were too focused on wolfing down our food each time we went there. I am still dreaming of their Bo Luo Bao and their Satay Beef Noodles.

The only downside of our location was the fact that we had to travel abit to get to Disneyland. (MTR going there and a cab coming back). Given that the kids needed their afternoon naps, we pretty much had to visit Disneyland over two days (a morning and an evening trip).

To be honest, it would definitely be a struggle for me to decide between Langham Place and Disneyland hotels for our next trip. Guess we will just have to see if food or sleep reigns supreme!