When FinallyMama initiated the “What Singapore Means to You” blog train, I was really excited to take part in it. After all I figured how hard was it going to be for a person who was born and bred in Singapore to pen down her feelings about Singapore. As the day of my blog post neared, I started to panic, not for the lack of something to write but because I realized that it was going to be hard to explain what Singapore means to me. 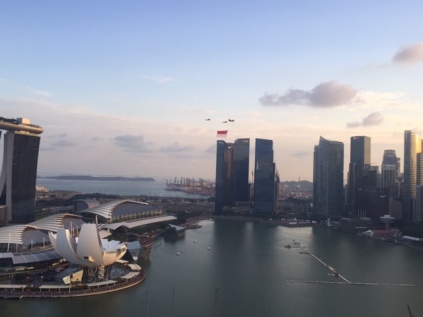 It wasn’t until National Day came around that I came to the full realization of what I wanted and needed to write about. My inspiration? The Singapore Pledge.

We, the citizens of Singapore,
pledge ourselves as one united people,
regardless of race, language, or religion
to build a democratic society
based on justice and equality
so as to achieve happiness, prosperity and
progress for our nation

Yes, notice the underlined portion? It was exactly this line that fully encompasses what my life has been about and what it means to be a Singaporean to me.

Lets start from the beginning…

I was born to Chinese parents who learnt Malay as they were growing up. I’m not sure if this was because of their Peranakan background or really just by default of what their parents opted for them in school. They didn’t speak a word of Mandarin but were fluent in the Hokkien dialect because this was how they would communicate with their parents and grandparents.

I picked up Mandarin when I went to Kindergarten. I came home after the 3rd day at Kindergarten and started speaking Mandarin to my shocked parents. My mum eventually picked up Mandarin in her adult years and started listening to Mando Pop. We were also exposed to various dialects such as Hokkien, Teochew and Cantonese as we were growing up and so can now fully understand and speak them to a certain extent.

Religion wise, my father is a Catholic and my mum was a Buddhist. Yes this made for quite a confusing childhood when it came to religion and what to practice but on a positive note, this taught us very early on about the existence of other religions and how to be tolerant.

I attended a mission school for 10 years and it was only after leaving school that I realized what my key take-away from that education was. I never noticed the ‘differences’. My friends were well…just that…friends! They were not Malay, Chinese, Indian or Eurasian. They were just like me and we were friends because we got along.

I think that was also what set the tone for my relationship with my husband, Joel. When I first met him, the concept of race never entered the picture at all. For those who don’t know, my husband is Indian. In fact, I have to admit that that fact never quite entered the picture until we were preparing for our wedding. But then again, lots of issues take place during wedding preps, regardless of race, language or religion. So I suppose it doesn’t quite count. 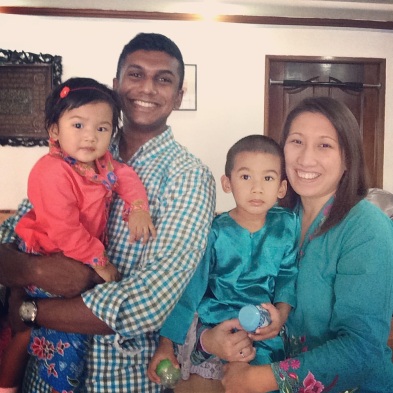 Which now brings me back to the point of What Singapore Means to Me. Singapore is that 1 line in the pledge which we as kids, have found ourselves reciting over and over again. Probably without realizing then that perhaps we do know the true meaning of it.

It also means that my kids will be able to tell people that their father is Indian, their mother is Chinese and that they come from an extremely multi-racial family. (Yes they also have an uncle who is Malay and aunty who is Muslim). I hope that they will eventually be able to speak/ understand English, Mandarin and Tamil and who knows maybe even Malay.

It means that my kids will hopefully never ‘notice’ the difference but yet know they exist and embrace it. “Regardless of race, language or religion”. This is what Singapore Means to Me.

This post is part of the ‘What Singapore Means To Me’ blog train, hosted by FinallyMama.

Up next is Yanxiang

By day, Yanxiang is a civil servant who has taught English in a secondary school, and am now working on policies within the larger civil service. Her work allows her to constantly consider the people around her, and society in which she live, and how to better the lives of her fellow citizens.

She recently embarked on the remarkable journey of parenting a little boy named Isaac. Read about her life as a parent and how it involves twice the laughter, twice the tears, twice the excitement, twice the challenges and an abundance of love at thelittlestandusmakesthree.wordpress.com